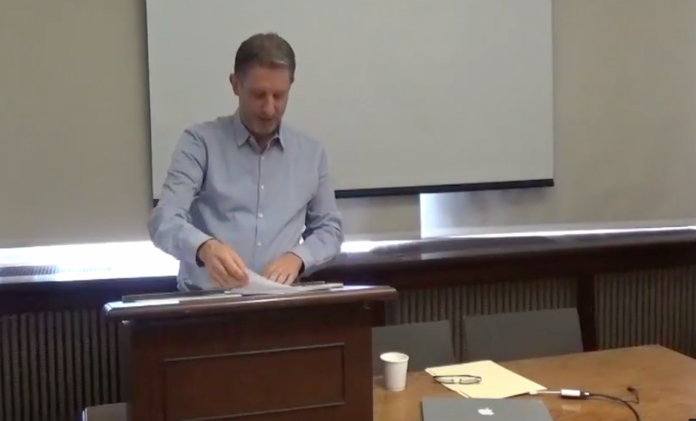 David Golumbia’s talk, “Mirowski As Critic of the Digital” is now online! Golumbia gave this talk at b2’s conference, Neoliberalism, Its Ontology and Genealogy: The Work and Context of Philip Mirowski, at the University of Pittsburgh on March 18, 2017.

Although Philip Mirowski’s work has been profoundly influential in fields as diverse as economics, history of science, political theory, and even literary studies, it is less well-known in the emerging complex of fields which are sometimes referred to as “digital studies,” meaning all the fields that directly analyze the social, cultural, and political-economic impact of the computer. This is unfortunate enough from the perspective of political economy, since Mirowski’s writings on neoliberalism resonate strongly with some of the most incisive political-economic work in digital studies. It is even more unfortunate when Mirowski’s work is seen at a larger scale, wherein he emerges as one of the most serious thinkers anywhere regarding the myriad impacts of the computer, especially but not only on intellectual practice over the last hundred or so years. From his writings on the neoliberal grounding of concepts like “open science,” to his recent “fictionalist” account of the function of information in economics, and especially in his thorough and uncompromising analysis of the computer and its metaphorics across a variety of disciplines in Machine Dreams, Mirowski’s work constitutes an unmatched source of critical thought that deserves to be far more widely disseminated among scholars of the digital.

David Golumbia is Associate Professor of English at Virginia Commonwealth University. He is the author of The Politics of Bitcoin: Software as Right-Wing Extremism (2016), and The Cultural Logic of Computation (2009).