Note from the Editor:

While scholars of the former Soviet empire and post-Soviet republics have a long history of addressing mechanisms of state violence and control, particularly focusing on those techniques that emerged amidst the 1917 revolution, the Stalinist purges, and during WWII, the conceptual kernel of the discourse and practice of violence has been sparingly addressed from a contemporary vantage. Particularly in a moment of heightened police brutality, following the Covid-19 pandemic and its revival of global forms of political and economic collapse, as well as Putin’s invasion of Ukraine, this dossier considers the resonance of shifting modes of policing during Soviet collapse. How did the policing imaginary shift amidst the collapse and formation of post-soviet nationalisms? How was the figure of the policeman represented in late soviet and post-soviet contemporary art and literature as artists and thinkers renegotiated the relationship between state politics and protest, actions and censorship? How did discourses of policing shift in the 90s and early 2000s amidst economic and infrastructural collapse (inflation, power outages, shifting institutional structures, blackmarket arms availability) and as the rise of new nationalisms reorganized discourses of race and ethnicity across the former imperial space? This dossier collects short essays on policing and the figure of the policeman amidst the collapse from Xinjiang, the Caucasus, and Russia. We hope to continue to expand this collection of short essays further to address the ongoing concerns with policing in the region. 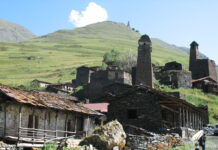 Florian Mühlfried — “Seeing for a State: Policing the Border between Georgia and the Russian Federation”