In every era, there are several men and women born who make the unthinkable thinkable, but rare and far in between are those who make the once thinkable utterly unthinkable. Nelson Mandela was one of these extraordinary people, a man whose words and actions have such deep repercussions all over the globe, so that now, indeed, even rarer than Mandela is the person who has not heard of him.

When people of my generation, teenagers and twentysomethings, when we hear about South African apartheid, we feel that it occurred in another time, in a remote and bygone era. If I were to suggest today to my community college students, entering freshmen with open minds and great curiosity and imagination, that during their lifetime a nation had instigated a system of governed racial segregation, this possibility would seem so farfetched as to strain their imaginations. It would seem so unjust, nonsensical, and unbelievable that my students would more than likely all simultaneously pull out their smartphones to show me that I was wrong, to correct me, to tell me that this sort of thing could not exist in their world. After glancing at Mandela’s Wikipedia page, they’d raise their shocked heads and look at me like they’d swallowed something nasty. I would be able to empathize wholeheartedly with their disbelief since fairness and equality are such basic human rights to me, to many people in this world, that to know that so recently this was not so for a whole country is quite incredible. This generation, including me, and our sense of the need—no, rather, the normalcy—of justice, was fathered by Mandela, conceived in the years he spent struggling in and out of prison and undoing the effects of apartheid and institutionalized racism in South Africa. 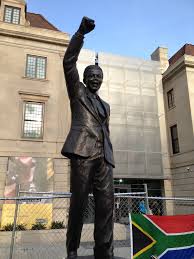 Older people may not realize how Mandela so changed the world that young people almost cannot fathom racial discrimination, particularly by a government against its own people, in their time. So when students on campuses across the United States and across the world march against Israeli apartheid policies that marginalize and politically segregate Palestinians, they walk behind Mandela, continuing his journey on the long road toward justice and equality. When young people read the news about institutionalized racism against minorities in their own countries and those abroad, they hear the whispers of Mandela in his wisdom telling them that they must arm themselves with education to fight oppression in all forms. When young men and women itch with the impatience of youth to see immediate change or simply give up, Mandela’s story and spirit gently remind them that even if they were to spend their entire lives up to that point physically imprisoned but mentally preparing, most of them would still have many years at their disposal to courageously climb their own great hill and many more hills after it as well.

Nelson Mandela’s legacy, his gift to generations to come, is the story of his struggle. Mandela’s gift to future generations, like most gifts from parents, will be treated one of two ways: it will either be applauded and appreciated before being quickly and quietly tucked into a corner of one’s closet, taken out only when guests who will look for the gift visit, or, and I sincerely hope, his gift will be kept on our mantel, shined and cleaned regularly, allowing us to look into it and reexamine ourselves, our character, our fights, our struggles, and our lives in the light of Mandela’s story.