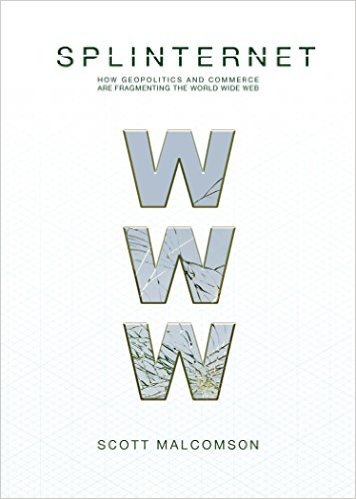 a review of Scott Malcomson, Splinternet: How Geopolitics and Commerce Are Fragmenting the World Wide Web  (OR Books, 2016)
by Richard Hill
~

The implicit premise of this valuable book is that “we study the past to understand the present; we understand the present to guide the future.” In that light, the book makes a valuable contribution by offering a sound and detailed historical survey of aspects of the Internet which are not well-known nor easily accessible outside the realms of dedicated internet research. However, as explained below, the author has not covered some important aspects of the past and thus the work is incomplete as a guide to the future. This should not be taken as criticism, but as a call for the author, or other scholars, to complete the work.

The book starts by describing how modern computers and computer networks evolved from the industrialization of war and in particular due to the advantages that could be gained by automating the complex mathematical calculations required for ballistics on the one hand (computers) and by speeding up communications between elements of armed forces on the other hand (networks). Given the effectiveness of ICTs for war, belligerents before, during, and after World War II heavily funded research and development of those technologies in the military context, even if much of the research was outsourced to the private sector.

Malcomson documents how the early founders of what we now call computer science were based in the USA and were closely associated with US military efforts: “the development of digital computing was principally an unintended byproduct of efforts to improve the accuracy of gunfire against moving targets” (49).

Chapter 1 ends with an account of how Cold War military concerns (especially so-called mutual assured destruction by nuclear weapons) led to the development of packet switched networks in order to interconnect powerful computers: ARPANET, which evolved to become the Internet.

Chapter 2 explores a different, but equally important, facet of Internet history: the influence of the anti-authoritarian hacker culture, which started with early computer enthusiasts, and fully developed in the 1970s and 1980s, in particular in the West Coast (most famously documented in Steven Levy’s 1984 book Hackers: Heroes of the Computer Revolution). The book explains the origins of the venture capitalism that largely drove the development of ICTs (including the Internet) as private risk capital replaced state funding for research and development in ICTs.

The book documents the development of the geek culture’s view that computers and networks should be “an instrument of personal liberation and create a frictionless, alternative world free from the oppressing state” (101). Malcomson explains how this led to the belief that the Internet should not be subject to normal laws, culminating in Barlow’s well known utopian “Declaration of the Independence of Cyberspace,” and explains how such ideas could not, and did not survive. The chapter concludes: “The subculture had lost the battle. Governments and large corporations would now shape the Internet” (137). But, as the book notes later (171), it was in fact primarily one government, the US government, that shaped the Internet. And, as Shawn Powers and Michael Jablonski explain in The Real Cyberwar, the US used its influence to further its own geopolitical and global economic goals.

Chapter 3 explores the effects of globalization, the weakening of American power, the rise of competing powers, and the resulting tensions regarding US dominance of ICTs in general and the Internet in particular. It also covers the rise of policing of the Internet induced by fear of “terrorists, pedophiles, drug dealers, and money launderers” (153).

We have come full circle: a technology initially designed for war is now once again used by the military to achieve its aims, the so-called “war on terror.” So there is a tension between three different forces, all of which were fundamental to the development of ICTs (including the Internet): the government, military, and security apparatus; more-or-less anarchic technologists; and dominant for-profit companies (which may have started small, but can quickly become very large and dominant – at least for a few years until they are displaced by newcomers).

As the subtitle indicates, the book is mostly about the World Wide Web, so some of the other aspects of the history of the Internet are not covered. For example, there is no mention of the very significant commercial and political battles that took place between proponents of the Internet and proponents of the Open Systems Interconnection (OSI) suite of standards; this is a pity, because the residual effects of those battles are still being felt today. Nor does the book explore the reasons for and effects of the transition of the management of the Internet from the US Department of Defense to the US Department of Commerce (even if it correctly notes that the chief interest of the Clinton administration “was in a thriving Internet that would lead to new industries and economic growth” [133]).

Malcomson explains well how there were four groups competing for influence in the late 1990s: technologists, the private sector, the US government, and other governments, and notes how the US government was in an impossible situation, since it could not credibly argue simultaneously that other governments (or intergovernmental organizations such as the ITU) should not influence the Internet while it itself formally supervised the management and administration of the domain name system (DNS). However, he does not explain how the origins of the DNS, its subsequent development, or how its management and administration were unilaterally hijacked by the US, leading to much of the international tension that has bedeviled discussions on Internet governance since 1998.

Regarding the World Wide Web, the book does not discuss how the end-to-end principle and its premise of secure end devices resulted in unforeseen consequences (such as spam, cybercrime, and cyberattacks) when unsecure personal computers became the dominant device connected via the Internet. Nor does it discuss how the lack of billing mechanisms in the Internet protocol suite has led to the rise of advertising as the sole revenue generation mechanism and the consequences of that development.

The book analyses the splintering (elsewhere called fragmentation) brought about by the widespread adoption of proprietary systems operating system and their associated “apps”, and by mass surveillance. As Malcomson puts the matter, mass surveillance “was fatal to the universality of the web, because major web companies were and are global but cannot be both global and subject to the intricate agendas of US intelligence and defense institutions, whose purpose is to defend national interests, not universal interests” (160).

However, the book does not discuss in any depth other sources of splintering, such as calls by some governments for national control over some portions of the Internet, or violations of network neutrality, or zero rating. Yet the book notes that the topic of network neutrality had been raised by Vice President Gore as early as 1993: “Without provisions for open access, the companies that own the networks could use their control of the networks to ensure that their customers only have access to their programming. We have already seen cases where cable company owners have used their monopoly control of their networks to exclude programming that competes with their own. Our legislation will contain strong safeguards against such behavior” (124). As we know, the laws called for in the last sentence were never implemented, and it was only in 2015 that the Federal Communication Commission imposed network neutrality. Malcomson could have used his deep knowledge of the history of the Internet to explain why Gore’s vision was not realized, no doubt because of the tensions mentioned above between the groups competing for influence.

The book concludes that the Internet will increasingly cease to be “an entirely cross border enterprise”(190), but that the benefits of interoperability will result in a global infrastructure being preserved, so that “a fragmented Internet will retain aspects of universality” (197).

As mentioned above, the book provides an excellent account of much of the historical origins of the World Wide Web and the disparate forces involved in its creation. The book would be even more valuable if it built on that account to analyze more deeply and put into context trends (which it does mention) other than splintering, such as the growing conflict between Apple, Google et al. who want no restrictions on data collection and encryption (so that they can continue to collect and monetize data), governments who want no encryption so they can censor and/or surveil, and governments who recognize that privacy is a human right, that privacy rules should be strengthened, and that end-users should have full ownership and control of their data.

Readers keen to understand the negative economic impacts of the Internet should read Dan Schiller’s Digital Depression, and readers keen to understand the negative impacts of the Internet on democracy should read Robert McChesney’s Digital Disconnect. This might lead some to believe that we have would up exactly where we didn’t want to be: “government-driven, corporate-interest driven, profit-driven, monopoly-driven.” The citation (from Lyman Chapin, one of the founders of the Internet Society), found on p. 132 of Malcomson’s book, dates back to 1991, and it reflects what the technologists of the time wanted to avoid.

To conclude, it is worth noting the quotation on page 57 from Norbert Wiener: “Just as the skilled carpenter, the skilled mechanic, the skilled dressmaker have in some degree survived the first industrial revolution, so the skilled scientist and the skilled administrator might survive the second [the cybernetic revolution]. However, taking the second revolution as accomplished, the average human of mediocre attainments has nothing to sell that is worth anyone’s money to buy. The answer, of course, is to have a society based on human values other than buying and selling.”

Wiener thus foresaw the current fundamental trends and dilemmas that have been well documented and analyzed by Robert McChesney and John Nichols in their new book People Get Ready: The Fight Against a Jobless Economy and a Citizenless Democracy (Nation Books, 2016).

There can be no doubt that the current trends are largely conditioned by the early history of ICTs (and in particular of the Internet) and its roots in military applications. Thus Splinternet is a valuable source of material that should be carefully considered by all who are involved in Internet policy matters.
_____