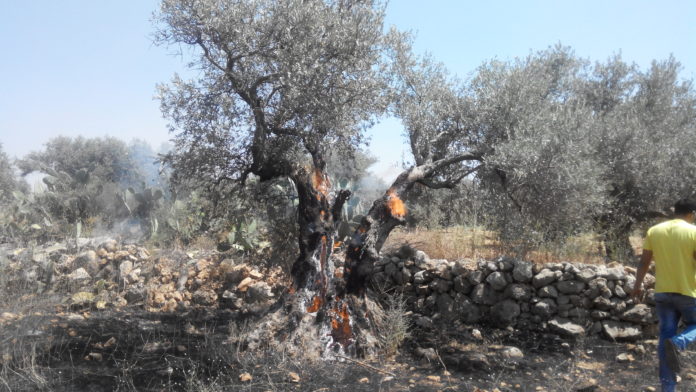 In presenting the economic part of the U.S “deal of the century” for Israel/Palestine, Jared Kushner managed to describe the woes of the Palestinian economy in great detail without mentioning the Israeli occupation. He invoked a fantasy of economic prosperity for Palestinians as if Israeli forces are not present in Palestinian space. At the same time, the Trump administration moved the US embassy to Jerusalem and recognized Israel’s political sovereignty over the illegally-annexed Syrian Golan Heights, where a new Jewish-only colony, “Trump Heights”, was unveiled. Both US ambassador Friedman and chief negotiator Greenblatt announced their support for the annexation of illegal settlements in the West Bank. This is a masterful application of segregation in the mind: Israel can expand as if Palestine does not exist. Palestine can grow as if there is no occupation.

How did the Israeli military occupation, initially opposed by all the UN member-countries, become normalized to the point that the Israeli and US governments are emboldened to discard the façade of a “temporary” occupation and embrace the idea of a “Greater Israel” apartheid state in which a Jewish minority will rule over a Palestinian majority through undemocratic means and military might? This process of normalizing the occupation was carefully crafted in the boardrooms and offices of economists and statisticians, especially from the OECD, using the legal apparatus of “economic territory” to accept annexation as a de-facto reality.

It’s been a longtime practice of Israel Central Bureau of Statistics to account for the economic activity of Jewish settlers in the Occupied Palestinian Territory (OPT) and by doing so to extend its statistical borders beyond the Green Line. In the West Bank (including East Jerusalem), it only accounts for the economic activities of the Jewish population, thus racializing Israel statistical borders. The establishment of the Palestinian Central Bureau of Statistics in 1994 was used by the Israeli authorities as an excuse to ignore the vast majority of the population of the OPT, and treat the area as if it were a sparsely-populated Jewish-Israeli region.

This practice became the center of dispute between Israel and the member states of the OECD when Israel negotiated its way to become a member of this exclusive club. The OECD countries did not approve of Israel extending its statistical borders along racial lines. Israel, on the other hand, was not willing to concede the economic overreach of its sovereignty.

Shlomo Yitzhaki, the chairman of the Israeli Central Bureau of Statistics (ICBS) suggested to the OECD that Israel include the Jewish settlement in its national accounts as an EEZ: Exclusive Economic Zone, as a means to resolve the impasse and allow Israel into the OECD.

The EEZ itself came to the world as an international law apparatus that the UN Conference on the Law of the Sea brought to life in 1982. The EEZ was used by the international community as a means to pacify the post-WWII world, with its growing addiction to fossil fuels, by drawing a new set of borders that extend beyond the political borders termed adequately “economic territory.” Since 1994, when the EEZ came into effect, any coastal state on the planet suddenly had two set of borders, political and economic. The latter could extend up to 200 nautical miles into the land lying at the bottom of the sea along its shores. In this territory, named “Exclusive Economic Zones,” a country could assert economic monopoly over the exploitation of fossils now seen as natural resources. It could, as in the case of Norway, exploit these natural resources and form a wealth fund that would guarantee the economic security of its citizens. Or it could outsource the exclusive right to profit from these resources and tax them in return for a percentage of the revenue. It could also give it away for free to a handful of multinational corporations. Lastly, it could leave them be, out of concern for the welfare of the planet and its inhabitants.

Yitzhaki’s unorthodox use of the EEZ terminology that treated the West bank as an ocean and the Israeli settlers as fossils did not change the fact that he was suggesting a segregated racialized statistical approach: in the OPT, only about 600,000 Jewish Israelis would count, and 4.5 million Palestinians would simply not be included in the statistics. The OECD rejected Yitzhaki’s offer, and demanded that Israel send statistics which do not include the OPT at all.

The compromise reached was that Israel would ascend to the OECD in 2010, and within one year would provide the OECD with new statistics that distinguish between Israel in its internationally-recognized borders and the OPT.  Israel broke the agreement, and the OECD used its own economists to try to come up with such a segregation. It failed, of course, and ended up publishing reports on Israel exactly as Yitzhaki wanted: they included statistics on all Israeli citizens in Israel and in the OPT, and ignored the 4.5 million Palestinians who live in the OPT and under full Israeli economic control.

Anyone trying to write the story of the segregated economy in the territory of historic Palestine faces several obstacles. Israel continues to violate its agreement with the OECD and does not provide two sets of national accounts, one with and one without the EEZ. In the statistical data that Israel’s CBS shares with the public, the economic activity in Israel’s economic territory is not categorized to activity in the OPT and activity inside Israel, so there is no easy way to calculate statistics on Israel in the bounds of its political borders. Aggregating the national accounts published by the Israeli and the Palestinian Central Bureau of Statistics (PCBS) is not an easy task either, because the ICBS and PCBS use different methodologies, conduct their census in different years, and use different definitions for delineating regions. This is especially apparent in the largest Israeli city and the largest Palestinian city – Jerusalem – which both the ICBS and PCBS claim as part of their economic territory.

Israel has a global reputation as a modern country with a booming high-tech economy and excellent education and health systems. On the UN’s Human Development Index, Israel is ranked the 22nd most developed country in the world (as of 2018). This view of the Israeli economy is only made possible by tacitly accepting the segregation embedded in the Israeli political system.

A telling sign of how segregation came to define the Israeli economy was the response in Israel to the first OECD report on Israel from 2010. The report criticized Israel’s segregated education system and the high correlation between religious and ethnic identity and poverty. Prime Minister Netanyahu’s response was “if we discount the Arabs and the Ultra-Orthodox, our situation is excellent!” It should be noted that in his statement he asked to discount not the Palestinians of the OPT, but rather the Arab citizens of the State of Israel, who make up approximately 22% of the population, plus approximately 15% of the population who are Ultra-Orthodox Jews. Netanyahu wishes to present to the world an Israeli economy in which only 63% of the citizens, and only about 42% of the population in the one economy, matter.

What, then, does the statistics of the one economy really look like? What is the average GDP per capita for the whole region of Israel/Palestine? What is the percentage of unemployed people, and of people who live under the poverty line? What is the average working wage? The methodological obstacles which face these seemingly simple questions show how radical the idea of inclusion is, even just from a statistical standpoint. Such calculations require cutting and sewing together nearly incompatible statistical reports that present unsynchronized data collected according to different methodologies.

GDP per capita is perhaps the easiest to measure, although the informal economy, especially in the Gaza Strip, makes the error margins for such a calculation frighteningly wide. The World Bank reports that the total GDP in the OPT (for Palestinians only, not for Israeli colonists) was US $14.7 billion in 2018[i]. The World Bank also reports that in Israel that year (here colonists are counted, but Palestinians in the OPT are not), GDP was US$ 353.3 billion.[ii] If we divide this by the total population of 13,824,813 people (adding together the ICBS and PCBS population estimates for 2018), we arrive at a per-capita GDP of US$26,619. This puts the average prosperity of the one economy somewhere between Kazakhstan and Romania in the world ranking. The difference, of course, is that income and wealth are distributed much less equally in Israel/Palestine than in Kazakhstan and Romania, because upper class Jewish Israelis in northern Tel-Aviv enjoy a lifestyle that is comparable to that of wealthy Europeans and unimaginable to the residents of the Gaza City slums, which are equivalent to Brazilian favelas or impoverished neighborhoods New Delhi. Tel Aviv and Gaza are just a few kilometers away along the same coastline.

When it comes to other economic indicators, such as poverty, unemployment, average wages, etc., the methodological gap is too wide to breach without a team of statisticians and economists.

When the one economy under exclusive Israeli control is discussed, the political debate about Israel/Palestine takes on a completely new perspective. The Oslo Agreements signed in the 1990s have received tremendous support from the international community because they simplified the issue and framed the Palestinian struggle for freedom and human rights as the “Israeli-Palestinian conflict,” as if two nations, two countries, are fighting over a piece of land. The economic reality on the ground calls for a much different perspective: there is only one country. In the entire area only one central bank is allowed to print one currency (bearing the Israeli national symbols). Taxes are controlled and collected by the Israeli Ministry of Finance, and the Palestinian Authority as well as the Hamas government in Gaza are granted limited local autonomy by the Israeli authorities not unlike a municipal council which is entrusted with a limited ability to collect some local taxes and manage a small budget.

Within this economy, divisions run deep and wide. Palestinians in Gaza live in prison-like conditions separated from the rest of the world, but Palestinians in the West Bank are also restricted to strictly controlled enclaves surrounded by apartheid roads and walls, which are traversable to Israeli colonists but not to the native population, which includes millions of people. Even inside “Israel proper” (i.e. the internationally recognized 1967 borders), non-Jewish citizens  are subjected to various levels of segregation and discrimination. Moreover, Even Jewish citizens of Israel are living in a highly hierarchical and unequal society, in which ethnicity, religious affiliation, family background, and gender can accurately predict one’s economic prospects.

Every OECD report which comes out under these conditions is contaminated by the realities of Israeli apartheid. Many economists at the OECD do not concern themselves with Israel/Palestine at all. They write about the rising inequality in OECD economies, the importance of investing in education, transparency in taxation, investment in renewable energy, and combating climate change. Each one of these reports presents data based on the lie that in the Israel exclusive economic zone Palestinians do not exist. Even if the impact on the OECD-wide statistics may be small when averaged across all OECD members, there is still a small toll paid by each OECD report, by taking the Israeli statistics at face value and failing to call out segregation.

Dr. Dotan Leshem’s book The Origins of Neoliberalism: Modeling the Economy from Jesus to Foucault was published by Columbia University Press in 2016.