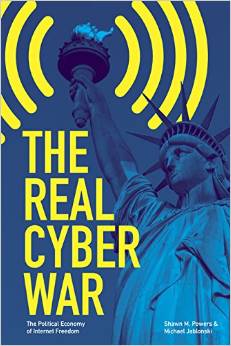 a review of Shawn M. Powers and Michael Jablonski, The Real Cyber War: The Political Economy of Internet Freedom  (University of Illinois Press, 2015)
by Richard Hill
~
Disclosure: the author of this review is thanked in the Preface of the book under review.

Both radical civil society organizations and mainstream defenders of the status quo agree that the free and open Internet is threatened: see for example the Delhi Declaration, Bob Hinden’s 2014 Year End Thoughts, and Kathy Brown’s March 2015 statement at a UNESCO conference. The threats include government censorship and mass surveillance, but also the failure of governments to control rampant industry concentration and commercial exploitation of personal data, which increasingly takes the form of providing “free” services in exchange for personal information that is resold at a profit, or used to provide targeted advertising, also at a profit.

In Digital Disconnect, Robert McChesney has explained how the Internet, which was supposed to be a force for the improvement of human rights and living conditions, has been used to erode privacy and to increase the concentration of economic power, to the point where it is becoming a threat to democracy. In Digital Depression, Dan Schiller has documented how US policies regarding the Internet have favored its geo-economic and geo-political goals, in particular the interests of its large private companies that dominate the information and communications technology (ICT) sector worldwide.

Shawn M. Powers and Michael Jablonski’s seminal new book The Real Cyber War takes us further down the road of understanding what went wrong, and what might be done to correct the situation. Powers, an assistant professor at Georgia State University, specializes in international political communication, with particular attention to the geopolitics of information and information technologies. Jablonski is an attorney and presidential fellow, also at Georgia State.

There is a vast literature on internet governance (see for example the bibliography in Radu, Chenou, and Weber, eds., The Evolution of Global Internet Governance), but much of it is ideological and normative: the author espouses a certain point of view, explains why that point of view is good, and proposes actions that would lead to the author’s desired outcome (a good example is Milton Mueller’s well researched but utopian Networks and States). There is nothing wrong with that approach: on the contrary, such advocacy is necessary and welcome.

But a more detached analytical approach is also needed, and Powers and Jablonski provide exactly that. Their objective is to help us understand (citing from p. 19 of the paperback edition) “why states pursue the policies they do”. The book “focuses centrally on understanding the numerous ways in which power and control are exerted in cyberspace” (p. 19).

Starting from the rather obvious premise that states compete to shape international policies that favor their interests, and using the framework of political economy, the authors outline the geopolitical stakes and show how questions of power, and not human rights, are the real drivers of much of the debate about Internet governance. They show how the United States has deliberately used a human rights discourse to promote policies that further its geo-economic and geo-political interests. And how it has used subsidies and government contracts to help its private companies to acquire or maintain dominant positions in much of the ICT sector.

Jacob Silverman has decried the “the misguided belief that once power is arrogated away from doddering governmental institutions, it will somehow find itself in the hands of ordinary people”. Powers and Jablonski dissect the mechanisms by which vibrant government institutions deliberately transferred power to US corporations in order to further US geo-economical and geo-political goals.

In particular, they show how a “freedom to connect” narrative is used by the USA to attempt to transform information and personal data into commercial commodities that should be subject to free trade. Yet all states (including the US) regulate, at least to some extent, the flow of information within and across their borders. If information is the “new oil” of our times, then it is not surprising that states wish to shape the production and flow of information in ways that favor their interests. Thus it is not surprising that states such as China, India, and Russia have started to assert sovereign rights to control some aspect of the production and flow of information within their borders, and that European Union courts have made decisions on the basis of European law that affect global information flows and access.

As the authors put the matter (p. 6): “the [US] doctrine of internet freedom … is the realization of a broader [US] strategy promoting a particular conception of networked communication that depends on American companies …, supports Western norms …, and promotes Western products.” (I would personally say that it actually supports US norms and US products and services.) As the authors point out, one can ask (p. 11): “If states have a right to control the types of people allowed into their territory (immigration), and how its money is exchanged with foreign banks, then why don’t they have a right to control information flows from foreign actors?”

To be sure, any such controls would have to comply with international human rights law. But the current US policies go much further, implying that those human rights laws must be implemented in accordance with the US interpretation, meaning few restrictions on freedom of speech, weak protection of privacy, and ever stricter protection for intellectual property. As Powers and Jablonski point out (p. 31), the US does not hesitate to promote restrictions on information flows when that promotes its goals.

Again, the authors do not make value judgments: they explain in Chapter 1 how the US deliberately attempts to shape (to a large extent successfully) international policies, so that both actions and inactions serve its interests and those of the large corporations that increasingly influence US policies.

As a specific example, they focus on Google, showing how it (largely successfully) aims to control and dominate all aspects of the data market, from production, through extraction, refinement, infrastructure and demand. A chapter is devoted to the economics of internet connectivity, showing how US internet policy is basically about getting the largest number of people online, so that US companies can extract ever greater profits from the resulting data flows. They show how the network effects, economies of scale, and externalities that are fundamental features of the internet favor first-movers, which are mostly US companies.

The remedy to such situations is well known: government intervention: widely accepted regarding air transport, road transport, pharmaceuticals, etc., and yet unthinkable for many regarding the internet. But why? As the authors put the matter (p. 24): “While heavy-handed government controls over the internet should be resisted, so should a system whereby internet connectivity requires the systematic transfer of wealth from the developing world to the developed.” But freedom of information is put forward to justify specific economic practices which would not be easy to justify otherwise, for example “no government taxes companies for data extraction or for data imports/exports, both of which are heavily regulated aspects of markets exchanging other valuable commodities”(p. 97).

The authors show in detail how the so-called internet multi-stakeholder model of governance is dominated by insiders and used “under the veil of consensus’” (p. 136) to further US policies and corporations. A chapter is devoted to explaining how all states control, at least to some extent, information flows within their territories, and presents detailed studies of how four states (China, Egypt, Iran and the USA) have addressed the challenges of maintaining political control while respecting (or not) freedom of speech. The authors then turn to the very current topic of mass surveillance, and its relation to anonymity, showing how, when the US presents the internet and “freedom to connect” as analogous to public speech and town halls, it is deliberately arguing against anonymity and against privacy – and this of course in order to avoid restrictions on its mass surveillance activities.

Thus the authors posit that there are tensions between the US call for “internet freedom” and other states’ calls for “information sovereignty”, and analyze the 2012 World Conference on International Telecommunications from that point of view.

Not surprisingly, the authors conclude that international cooperation, recognizing the legitimate aspirations of all the world’s peoples, is the only proper way forward. As the authors put the matter (p. 206): “Activists and defenders of the original vision of the Web as a ‘fair and humane’ cyber-civilization need to avoid lofty ‘internet freedom’ declarations and instead champion specific reforms required to protect the values and practices they hold dear.” And it is with that in mind, as a counterweight to US and US-based corporate power, that a group of civil society organizations have launched the Internet Social Forum.

Anybody who is seriously interested in the evolution of internet governance and its impact on society and democracy will enjoy reading this well researched book and its clear exposition of key facts. One can only hope that the Council of Europe will heed Powers and Jablonski’s advice and avoid adopting more resolutions such as the recent recommendation to member states by the EU Committee of Ministers, which merely pander to the US discourse and US power that Powers and Jablonski describe so aptly. And one can fondly hope that this book will help to inspire a change in course that will restore the internet to what it might become (and what many thought it was supposed to be): an engine for democracy and social and economic progress, justice, and equity.
_____