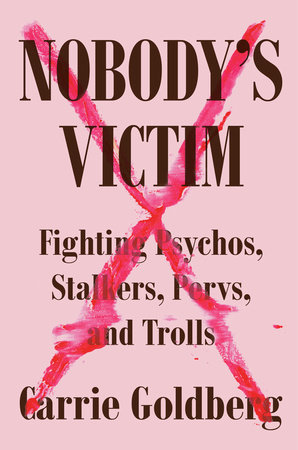 During an exchange on my blog in 2014 with an individual named Anonymous—it must have been a very popular baby name at some point—I was told, “Yes, yes, David, show us on the doll where the Internet touched you, because we all know that all evil comes from there.”  That discussion was in context to the internet industry’s anti-copyright agenda, but the smugness of the response, lurking behind a concealed identity while making an eye-rolling allusion to sexual assault, is characteristic of the tech-bro culture that dismisses any conversation about the darker aspects of digital life.  In fact, I am fairly sure it was the same Anonymous who decided that I had “failed the free speech test” because I wrote encouragingly about the prospect of making the conduct generally referred to as “revenge porn” a federal crime.

Those old exchanges, conducted in the safety of the abstract, came rushing into the foreground while I read attorney Carrie Goldberg’s Nobody’s Victim:  Fighting Psychos, Stalkers, Pervs, and Trolls, because Goldberg and her colleagues do not address conduct like “revenge porn” in the abstract: they deal with it as a tangible and terrifying reality.  It is at her Brooklyn law firm where the victims of that crime (and other forms of harassment and abuse) arrive shattered, frightened and suicidally desperate to escape the hell their lives have become—often with the push of a button.  These are people who can show us exactly how and where the “internet touched” them, and Goldberg’s book is a harrowing tutorial in the various ways online platforms provide opportunity, motive, sanctuary, and even profit for individuals who purposely choose to destroy other human beings.

Nobody’s Victim reads like an anthology of short thriller/horror stories but for the fact that each of the terrorized protagonists is a real person, and far too many of them are children.  These infuriating anecdotes are interwoven with the story of Goldberg’s own transformation from a young woman nearly destroyed by predatory men to become, as she puts it, the attorney she needed when she was in trouble.  The result is both an inspiring narrative of personal triumph over adversity and a rigorous critique of our inadequate legal framework, which needlessly exacerbates the suffering of people targeted by life-threatening attacks—attacks that were simply not possible before the internet as we know it.

Covering a lot of ground—from stalking to sextortion—Goldberg tells the stories of her archetypal clients, along with her own jaw-dropping experiences, in a voice that pairs the discipline of a lawyer with the passion of a crusader. “We can be the army to take these motherfuckers down,” her introduction concludes, and “What happened to you matters,” is the mantra of her epilogue.  It is clear that the central message she wants to convey is one of empowerment for the constituency she represents, but the details are chilling to say the least.

Anyone anywhere can have his or her life torn apart by remote control—i.e. via the web.  All the malefactor really needs is basic computer skills, a little too much time on his hands, and a profoundly broken moral compass.  Psychos, stalkers, pervs, trolls, and assholes are all specific types of criminals in the “Carrie Goldberg Taxonomy of Offenders.”  For instance, the ex-boyfriend who uploads non-consensual intimate images to a revenge-porn site is a psycho, while the site operator, profiting off the misery of others, is an asshole.

One theme that comes through loud and clear for me in Nobody’s Victim—particularly in context to the editorial scope of my blog—is that the individual conduct of the psychos, et al is only slightly less maddening than our systemic failure to protect the victims.  As a cyber-policy matter, that means the chronic misinterpretation of Section 230 of the Communications Decency Act as a speech-right protection and a blanket liability shield for online service providers.

Goldberg’s most high-profile client, Matthew Herrick, was the target of a disgruntled ex-boyfriend named Juan Carlos Gutierrez, who tried, via the gay dating app Grindr, to get Herrick at least raped, if not murdered.  By creating several Grindr accounts designed to impersonate Herrick, Gutierrez posted invitations to seek him out for rough, “rape-fantasy” sex, including messages that any protests to stop should be taken as “part of the game.”  Hundreds of men swarmed into Herrick’s life for more than a year—appearing at his home and work, often becoming verbally or physically aggressive upon discovering that he was not offering what they were looking for.

With Goldberg’s help, Herrick succeeded in getting Gutierrez convicted on felony charges, but what they could never obtain was even the most basic form of assistance from Grindr.  You might think it would be at least common courtesy for an internet business to remove accounts that falsely claim to be you—particularly when those accounts are being used to facilitate criminal threats to your safety and livelihood.  In fact, the smaller dating app Gutierrez had been using called Scruff eagerly and sympathetically complied with Herrick’s plea for help.  But Grindr told him to fuck off by saying, “There’s nothing we can do.”

Herrick, through Goldberg, sued Grindr for “negligence, deceptive business practices and false advertising, intentional and negligent infliction of emotional distress, failure to warn, and negligent misrepresentation.”  They lost in both the District Court and in the Second Circuit Court of Appeals, principally because most courts continue to read Section 230 of the CDA as absolute immunity for online service providers.  This cognitive dissonance, which chooses to ignore the fact that a matter like Herrick’s plight is wholly unrelated to free speech, is emphasized in an amicus brief that the Electronic Frontier Foundation (EFF) filed in the Second Circuit appeal on behalf of Grindr:

Isn’t that pretty?  But what the fuck has any of it got to do with using internet technologies to impersonate someone; to commit libel, slander, or defamation in his/her name; to deploy violent people (or in some cases SWAT teams) against a private individual; or to get someone fired or arrested—and all for the perpetrator’s amusement, vengeance, or profit?  None of that conduct is remotely protected by the speech right, and all of it—all of it—infringes the speech rights and other civil liberties of the victims.  Perhaps most absurdly, organizations like EFF choose to overlook the fact that the first right being denied to someone in Herrick’s predicament is the right to safely access all those invaluable activities enabled by online “intermediaries.”

No, Grindr did not commit those crimes, but let’s be real.  What was Herrick asking Grindr to do?  Remove the conduits through which crimes were being committed against him—online accounts pretending to be him.  Scruff complied, and I didn’t feel a tremor in the free speech right, did you?   If we truly cannot make a legal distinction between Herrick’s circumstances and all that frilly bullshit the EFF likes to repeat ad nauseum, then, we are clearly too stupid to reap the benefits of the internet while mitigating its harms.

Suffice to say, a fight over Section 230 is indeed brewing.  As it heats up, Silicon Valley will marshal its seemingly endless resources to defend the status quo, and they will carpet bomb the public with messages that any change to this law will be an existential threat to the internet as we know it.  There is some truth to that, of course, but the internet as we know it needs a lot of work.  Meanwhile, if anyone is going to win against Big Tech’s juggernaut on this issue, it will be thanks to the leadership of (mostly) women like Carrie Goldberg, her colleagues, and her clients.

It is an unfortunate axiom that policy rarely changes without some constituency suffering harm for a period of time; and those are exactly the people whose stories Goldberg is in a position to tell—in court, in Congress, and to the public.  If you read Nobody’s Victim and still insist, like my friend Anonymous, this is all a theoretical debate about anomalous cases, largely mooted by the speech right, there’s a pretty good chance you’re an asshole—if not a psycho, stalker, perv, or troll.  And that clock you hear ticking is actually the sound of Carrie Goldberg’s signature high heels heading your way.

David Newhoff is a filmmaker, writer, and communications consultant, and an activist for artist’s rights, especially as they pertain to the erosion of copyright by digital technology companies. He is writing a book about copyright due out in Fall 2020. He writes about these issue frequently as @illusionofmore on Twitter and on the blog The Illusion of More, on which an earlier version of this review first appeared.