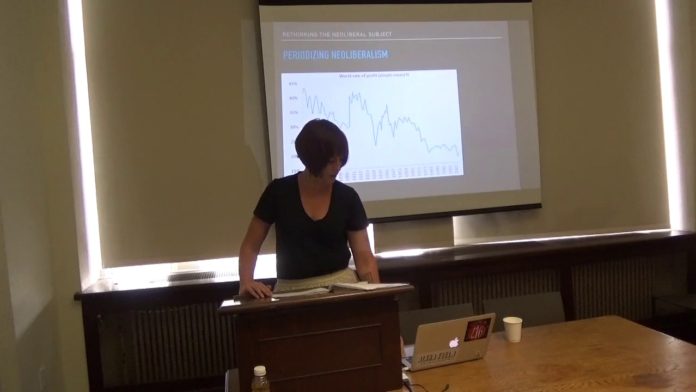 Annie McClanahan’s talk, “Hell Is Truth Seen Too Late” is now online! This lecture was given as part of b2’s conference, Neoliberalism, Its Ontology and Genealogy: The Work and Context of Philip Mirowski, at the University of Pittsburgh on March 18, 2017.

This talk attempts to think critically about the way neoliberalism functions as a periodizing term in cultural and literary studies. It explores the representation of so-called “neoliberal subjectivity”—particularly its association with an ostensibly rich individualism optimistic (if “cruelly” so) about its own entrepreneurial human capital—and argues that this characterization misses what is most quantitatively and qualitatively new about the present. By looking at the way the university has become a privileged site of these critiques, McClanahan argues that accounts of the “neoliberalization” of higher education depend on a historically inaccurate story about the university’s supposedly non-economic past, and also misunderstand the affective and material condition of students today. Turning instead to other sites—the payday loan shop, the homeless encampment, and the prison—she argues for a reframing of how we understand the subjects proper to our current historical epoch.

Annie McClanahan is Assistant Professor of English at UC Irvine. She is the author of Dead Pledges: Debt, Crisis, and 21st Century Culture (2016). She has previously been a System Fellow at the Institute for Research in the Humanities at the University of Wisconsin-Madison, and a Faculty Fellow at Cornell University’s Society for the Humanities and the University of Wisconsin-Milwaukee’s Center for 21st Century Studies. Her research interests include contemporary American literature and culture, economic thought and history, Marxist theory, and theory of the novel.