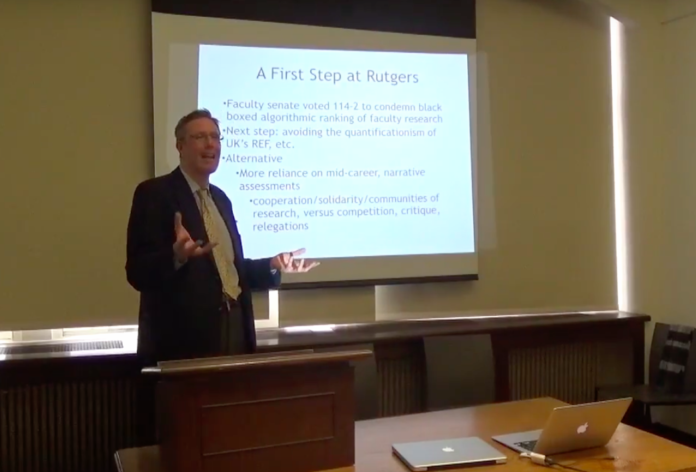 Frank Pasquale’s talk, “Relocating the Knowledge Problem: Preserving Professional Judgment in an Era of Metric Power” is now online! This talk was given as part of b2’s conference, Neoliberalism, Its Ontology and Genealogy: The Work and Context of Philip Mirowski, at the University of Pittsburgh, on March 17, 2017.

Could a robot do your job? For many business leaders, professions like medicine, education, and law are relics, destined to be replaced by some combination of software, artificial intelligence, and Uber-ized, precarious labor. But this disruptive vision of robotization is based on a naïve view of the quality of existing data, and the nature of progress in these fields. Preserving judgment and autonomy in professional work is critical both for humane labor policies, and improving quality in these fields.

Frank Pasquale researches the law of big data, artificial intelligence, and algorithms. He has testified before or advised groups ranging from the Department of Health and Human Services, the House Judiciary Committee, the Federal Trade Commission, and directorates-general of the European Commission. He is the author of The Black Box Society (Harvard University Press, 2015), which has been translated into Chinese, Korean, French, and Serbian. The book developed a social theory of reputation, search, and finance. He has served on the NSF-sponsored Council on Big Data, Ethics, & Society, and the program committees of the Workshop on Data and Algorithmic Transparency and the NIPS Symposium on Machine Learning and the Law. Frank has co-authored a casebook on administrative law and co-authored or authored over 50 scholarly articles. He co-convened the conference “Unlocking the Black Box: The Promise and Limits of Algorithmic Accountability in the Professions” at Yale University. He is now at work on a book tentatively titled Laws of Robotics: The Future of Professionalism in an Era of Automation (under contract to Harvard University Press).