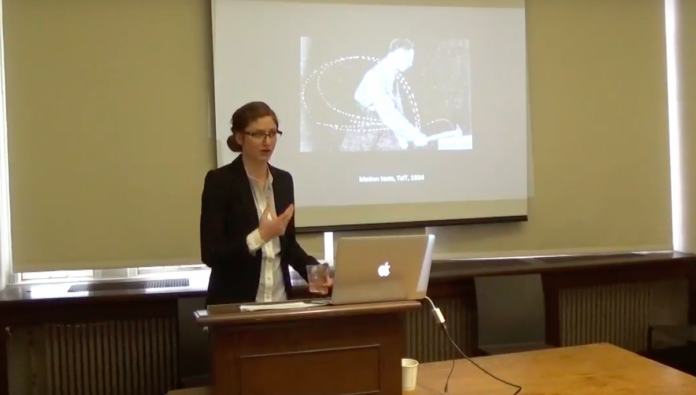 Leah Feldman’s talk, “Post-Soviet, Neoliberal, New Right Formations” is now online! Feldman gave this talk at b2’s conference, Neoliberalism, Its Ontology and Genealogy: The Work and Context of Philip Mirowski, at the University of Pittsburgh on March 18, 2017.

This talk takes up Post-socialist New Right responses to Neoliberalism through a comparative analysis of Eurasianist and Neoliberal models of totality. Following Mirowski’s discussion of the centrality of interdisciplinary, transdisiciplinary, and transacademic structures based on a conception of the informational marketplace and drawn from the post-humanist “cyborg” sciences, I argue that the Traditionalist International not only emerged, as it claims, to battle Neoliberal secular America as Antichrist, but by inhabiting some of the knowledge structures of the thought collective and its vision of totality.

Leah Feldman is an Assistant Professor of Comparative Literature at the University of Chicago. Her teaching and research explore the poetics and the politics of global literary networks, focusing on critical approaches to translation theory, semiotics, postcolonial theory, and Marxist aesthetics. Her current research traces connections between the Russian and Soviet empires and the Turko-Persianate world. Before joining the University of Chicago, Leah held two fellowships in residence at the Princeton Institute of International and Regional Studies and the Institute of Advanced Study at the Central European University in Budapest between 2013 and 2015. Her current book project On the Threshold of Eurasia: Orientalism and Revolutionary Aesthetics in the Caucasus, 1905-1929 exposes the ways in which the idea of revolution informed the interplay between orientalist and anti-colonial discourses in Russian and Azeri poetry, prose, and visual media. Tracing translations and intertextual engagements across Russia, the Caucasus and western Europe, it offers an alternative vision of empire, modernity and anti-imperialism from the vantage point of cosmopolitan centers in the Russian empire and Soviet Union.